Landmarks Foundation to move into building it moved in Jeff.

Neglected and way past its prime, the 101-year-old building created quite a spectacle as it rolled slowly down the middle of Spring Street in Jeffersonville last May.

Seven months later it is undergoing a complete makeover in preparation for a coming-out party in June.

The Willey-Allhands house, built in 1902 at 105 Sparks Ave., stood there until it was saved from the wrecking ball and moved to 115 W. Chestnut St. The structure had to go because its owner and neighbor, Clark Memorial Hospital, needed the land it stood on for more parking.

The Southern Regional Office of the Historic Landmarks Foundation of Indiana stepped in to accept the building as a donation from the hospital and moved all 115 tons and 2½ stories to the new address next to the foundation’s headquarters.

PHOTOS BY PAM SPAULDING, THE COURIER-JOURNAL

Joseph Rubel repaired the plaster in the Willey-Allhands house, which will soon become the home of the Southern Regional Office of the Historic Landmarks Foundation of Indiana.

The $300,000 makeover is nearly done, and the foundation is planning to move into the 2,900-square-foot space on June 1. “It shows that you can take a building that’s been neglected and targeted for demolition and make it into a showcase,” said Greg Sekula, the foundation’s executive director.

Sekula said it’s also a way to reintroduce period construction into an urban landscape that has lost buildings. That’s all the more important after losing a half a block of buildings on nearby Spring Street in a fire last month.

The Landmarks Foundation describes the Willey-Allhands house as a free classic with colonial revival embellishments.

“It’s got a kind of a split personality,” Sekula said.

It started out as a late Victorian house until a major remodeling in the late 1930s and early 1940s added the classical colonial revival touches, he said.

One of the building’s most prominent features is a porte cochere, something of an oversized forerunner to the modern carport. It’s a covering about 14 feet high that extends 12 feet or so over the driveway, designed to afford carriage riders a sheltered entry to the house. 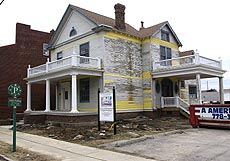 The home is named for its first owner, Frank Willey, and the Allhands family that later occupied it for more than 40 years. A fact sheet calls it “one of the last remaining vestiges of an enclave of once-fashionable, middle-class residential structures” built in its section of Jeffersonville in the late 19th and early 20th centuries.

When the Landmarks Foundation moves into Willey-Allhands, it will be leaving behind an even older building that the organization helped to save in the 1980s — the Grisamore House at 113 W. Chestnut St. The combination Federal and Greek Revival style structure was built as a double residence for brothers David and Wilson Grisamore in 1837.

A steady decline culminated in a 1981 fire that gutted the Grisamore House. It was purchased by local preservationists who invited the Landmarks Foundation to help in its restoration.

The foundation has had its office at Grisamore since 1983. The organization is now trying to sell the building, which has several business tenants, to pay off a loan for the renovation of Willey-Allhands.

“It basically shows that we are continuing our mission to save historic buildings,” Sekula said.